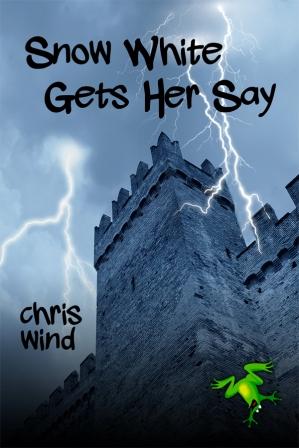 Snow White
Gets Her Say

the classic fairy tales retold – what would have happened if Gretel, Cinderella, Little Red Riding Hood, Snow White, Sleeping Beauty, Goldilocks, and others had been strong and critical girls and women living today?

a feminist revision of the standards

Available in print only as part of Satellites Out of Orbit.
A theatrical version of the fairy tales is available directly from chris or at stageplays.com.

“The voices you catch out of the old fairy tales are very impressive. I got quite attached to them.” Fiddlehead

“So I didn’t know what to expect when I read this … it was a fast read (not sure it took me an hour ) … laughed a lot (and sitting on a plane that made for some interesting looks) and when i finished … the only thing i could think of is … why isn’t anyone doing this on stage … and why not throw a couple of the boys in there with it (they can have their own crazy feminist slant) … what a great night of theater that would be … and in case you are wondering … my fave story in the collection is in fact Snow White’s … but the stepsister’s is a close second …”  szferris, Librarything

“Snow White Gets Her Say revisits classic fairy tales and presents them to a reader in a new light …   I find this aspect interesting. You grow up hearing these fairy tales all of your life more or less the same way, but this work puts them in a whole new light and allows you to explore ideas that you may have never thought of before.  The stories are presented as a character from the story addressing the reader and explaining what really happened.” Jeremy’s Novels http://jeremysnovels.weebly.com/blog.html

“I loved the sassy voices in these stories, and the humor, even when making hard points.”  PJ O’Brien, 5/5, Smashwords

That you don’t recognize me by name is but the first of my complaints about my tale. Oh you know me alright. I’m the main character–in a tale titled with the name of one of the men in the story. But what’s in a name? A lot. Especially if it’s a man’s name. This man’s name is the answer to the question upon which rests the fate of myself and my newborn child. So his name is very powerful, it is very important. My name apparently is not.

Nor is my life. For whether it is to be filled with joy and delight from being with my newborn, or empty with grief and loss from separation is to be decided by a mere guessing game.

Nor are my words important. I denied my father’s boast. I told the King I most definitely could not spin gold out of straw. But he didn’t believe me. Of course not. He chose instead to believe the words of an immature, egotistic, vain man. And I suffer the consequences.

The consequences. To pay for my father’s ridiculous lie, I lose my sanity, my freedom, and my dignity for three nights–and almost my child, forever. (And one sentence–one sentence in the whole tale is devoted to that ‘choice’, that decision to give up my child in return for my life.)

Because I ‘succeeded’ on the third night, I was ‘rewarded’ with marriage to the King. Thus, for all intents and purposes, I also lost my life. Can you imagine what it is like to be married–legally bound to honour and obey until death, and socioeconomically bound with little option but to stay and make the best of it–to a man who didn’t believe me, a man who locked me in a room for three nights, a man so greedy that he said three nights in a row he’d kill me unless I did as he wanted? And that was before he owned me.

But as the tale says, I am shrewd and clever. And I have learned the force of threat, and the importance of a name–especially if it is male. Proud fathers want very much to pass it on. But royal fathers–dear husband, aging Highness, what would happen to your precious lineage if my, your, only son were to suddenly–

Since I am not dead, and am living still…

Catherine is the name I’ve given to the woman in “Rumpelstiltskin”. One day a vain and proud miller boasted about his beautiful and clever daughter to the king, telling him that she could spin gold out of straw. The poor maiden denied it, but the king locked her in a room full of straw and insisted that she spin it into gold or else she’d lose her life.

Once in the room, she began to cry; then “a droll-looking little man” appeared and, after hearing her story, offered to do it for her if she’d give him her necklace. When the king returned and saw that the straw had indeed been spun into gold, he locked up the maiden with another roomful of straw. This time she paid the little man with her ring. The third time, the king added the promise of marriage if she succeeded, but she had nothing left with which to pay the little man. He asked for her first child, and having no other option, fearing death if the king returned to find straw and not gold, she agreed.

So she was married to the king, and when her first child was born, the little man came to collect. Appalled, she offered him instead “all the treasures of the Kingdom”–but he wanted the child. Eventually he softened his terms and said that if within three days she could tell him his name, she could keep the child.

For the next two days, she guessed all the names she knew and sent messengers all over the land to gather new ones. Finally, on the third day, a messenger returned with the name ‘Rumpelstiltskin’–which was indeed the little man’s name. She was therefore able to keep her child, and everyone laughed at the little man, Rumpelstiltskin, as he made his way away.