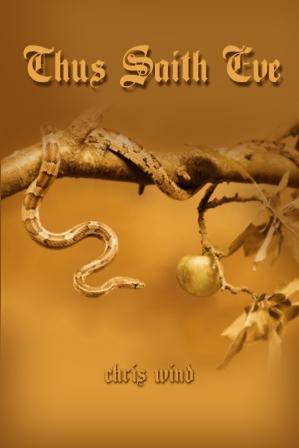 Eve should be blamed for choosing the apple?  For choosing knowledge over obedience?  Knowledge of good and evil?  She thinks not.

And, well, you can imagine what Noah’s wife had to say about his grand idea.

Not only good reading, but also well-suited for auditions.

Available in print only as part of Satellites Out of Orbit.

“Short, but definitely entertaining … and serious between the lines.” 5/5 Lee Harmon, A Dubious Disciple Book Review

“In this book the voices and personalities of women such as Noah’s wife, Mary of Bethany, Zipporah, and Vashti are reimagined in an exciting and empowering way.  … As in her other works, Wind uses historical people, events, and understandings to build a truly wonderful source of feminist fiction.  In addition to being an extremely enjoyable and thought provoking read, the monologues can also be used for audition and performance pieces.  …
“One of the monologues, featuring Mary of Bethany, starts with the line “That’s right.  There were thirteen of us.  One of us was a woman.” I may be a bit biased because Mary of Bethany is one of my favorite biblical women, but the way in which Wind is able to bring forth the snarky, smart, and confident essences of these women is truly masterful.  Mary’s story goes on to explain how women have been edited out of the biblical texts throughout the ages and highlights the importance of the Apocrypha and other similar texts.
“In the monologue of another Mary, this time Magdalen, Wind uses pieces of the resurrection story from multiple gospels to highlight the importance of the women’s role in proclaiming the resurrection.  Mary says, “You see, Christ knew He could trust us to tell the others exactly what had happened.  And we did.  We ran laughing, ecstatic, with joy and love, and told the world who we were and what we had seen.  But sadly, typically, our “words seemed to them as idle tales, and they believed them not” (Luke 24:11).  So weak is your faith, so strong your misogyny.”  In addition to that wonderful last line, I also love the image of joy and love that wind creates in this monologue.  …
“By imagining and expanding the personalities and voices of these women, Wind allows us to read the biblical text, as well as understand the history, in a completely new way.  As I read this book I felt like I got to know these biblical and mythological women in a way that I wouldn’t have imagined possible.  In addition to simply being a truly enjoyable fiction read, I believe these monologues would also be a wonderful addition to a daily spiritual practice, and look forward to using them in that way myself.” 5/5, Katie M. Deaver, feminismandreligion.com

the bad girl, the evil woman.

I stand accused, and sentenced. Without a trial. For life.

Because of my single action, millions of individuals have been born with ‘original sin’, have been guilty even before they acted, doomed before they started. I alone have been held responsible[1] for this sad and pathetic fallen race. Therefore, let me begin by correcting this: if I were free not to fall in the first place, they were free not to fall after me; and if I were not free, then I can’t be held responsible—for my fall or theirs.

Now, let us further examine the charges, let us correctly define that action.

I have been condemned for choosing knowledge over ignorance: the fruit I ate came from the tree of the knowledge of good and evil. In a society that praises pursuit of knowledge and honours men of wisdom, why have I been viewed with disfavour? Had Adam reached out first, would he have been so rebuked? Or is the state of ignorance requisite for women only? (Histories pass on Socrates, they pass over Aspasia.)

In the same vein, I chose experience over innocence. In a context of attitudes that value experience, the disapproval of my action can only imply the desire that women, like children, live in a state of innocence.

I have also been condemned for disobedience. If that were the issue, then why wasn’t the tree so named—‘the tree of obedience and disobedience’ or ‘the tree of temptation’. By naming it what it was not, God either deliberately tempted me or deliberately deceived me. And he should be judged, not I.

Perhaps though, the tree really was a tree of knowledge. In that case, one should wonder what insecurities led God to prefer obedience over knowledge. Indeed, one should wonder why he went so far as to forbid knowledge. The reason is evident in Genesis (3:22-23): he didn’t want us to equal him. He sent us out of Eden to prevent our eating from the tree of life, because already we were as wise for having eaten from the tree of knowledge, and if we had made it to the tree of life before he found us, we would’ve been immortal as well—we would’ve been as godly.

And that takes me onward, for counted among my sins is that of pride. Considering that later, through his son, God commands us to ‘follow in his footsteps’, I find the label of pride odd for the action that would do just that—make me like God. Furthermore, I find it odd to be condemned for being like God when, after all, he created us in his image (Gen 1:26-27). And God certainly is proud: to create us in his image can be called narcissistic, and to prefer us to spend our time admiring him rather than learning about him is equally evidence of pride. (As an aside, I would think that my knowledge would increase my admiration; that wasn’t why I ate the fruit, but if it was, would it have mattered? Did God ever ask my intent?)

I have also been charged with a lack of faith. Yet I took it on faith in the first place that God told us not to eat from the tree: remember, he gave the command to Adam before I even existed (Gen 2:16-17).[2] Further, I had faith in the serpent, I trusted the serpent to be telling the truth. Is it dishonourable to trust?

And is it reprehensible to act on that trust, as I did then in offering the fruit to another, to Adam? God commanded innocence, then held me responsible for an act of innocent intent. For how could I know my faith was misplaced? How could I know the serpent was evil until I had knowledge of good and evil? By telling us not to eat of the tree, he insisted on ignorance—but then held us responsible, for an act of ignorance.

Lastly, I have been condemned for using my reason, for it is through the exercise of reason that I decided to eat the fruit. The serpent’s explanation of God’s motives, that the knowledge of good and evil would make us godly and he didn’t want us to equal him (Gen 3:5), seemed very reasonable to me. God’s command on the other hand, not even to touch the fruit of the tree of knowledge of good and evil because then I’d die, seemed so very unreasonable. Where is the fault in using that faculty given to me by God? The fault is not mine, but God’s: he made reason guide our will and left our reason prey to deceit.

Or did he? History has it that the serpent’s words were false, that I was deceived. But God’s words after the fact (Gen 3:22 “Behold, the man is become as one of us”) verify the serpent’s prediction (Gen 3:5 “Ye shall be as gods”): the serpent was telling the truth.[3] And so I stand condemned, for listening to truth. And for offering that truth to others.

[1] Even though Adam was beside me through it all (Gen 3:6) and made not one objection. And, of course, also ate the fruit.
[2] I don’t rule out the possibility that the command therefore was meant only for Adam—God knew that knowledge in the hands of men is a dangerous thing.
[3] And in fact God lied: he said we would die (Gen 3:3) if we touched the fruit of that tree, and we didn’t—at least not for several hundred years.

Appendix entry for “I am Eve”